Building an Amazon Fulfillment Center is one thing….staffing it may be another… 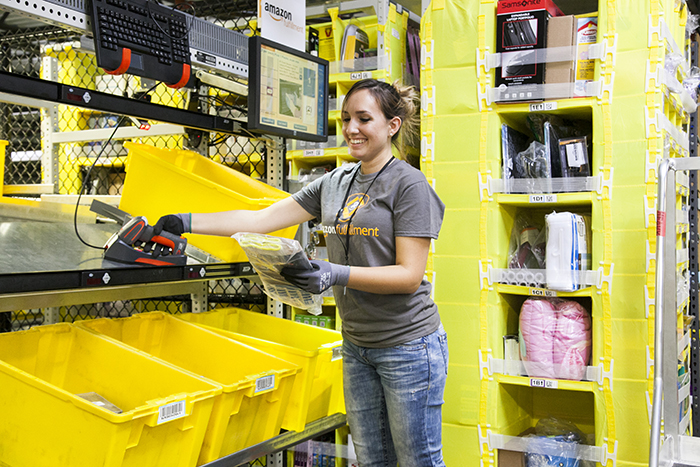 Breakneck growth in e-commerce demand has made it difficult for companies such as Amazon to keep their distribution network adequately staffed.

KANSAS CITY — Amazon’s new fulfillment center just outside of Kansas City is nothing unprecedented for the rapidly expanding e-commerce giant, but the local workforce development initiative to fill vacancies at the new facility is.

A team of workforce and economic development groups in partnership with the local community college have created an employee recruiting model to help Amazon, and other shippers down the road, grow their workforce at the same calculated-yet-breakneck pace as they are now growing their fulfillment center networks.

Amazon, and other e-commerce retailers, have been frank: they are running out of space to maintain their supersized inventories. “We were pretty vocal or pretty transparent anyway that we ran out of space,” Brian Olsavsky, Amazon’s chief financial officer, said on a first quarter earnings call last Thursday. “Especially due to some very strong demand for FBA (fulfillment by Amazon) space and services.”

“We added 26 fulfillment centers last year, 23 in the second half of the year,” Olsavsky said on a first quarter earnings call last Thursday. “That cost of start-up comes in a quarter afterwards. So there was some carryover from that.”

But expanding their fulfillment center network isn’t just about real estate and warehouse square footage, said Keely Schneider, executive director at the Kansas-based Workforce Partnership. “It’s not just what tax incentives and real estate breaks can a company get. It’s about the workforce,” she told JOC.com.

“It’s 856,000 physical square feet, but it’s 2.3 million usable square feet inside with its multiple mezzanines,” said Greg Kindle, president of the Wyandotte Economic Development Council. “There’s a lot of robotics, but it also takes a lot of people, about 1,500 — 1,350 of those are warehouse-type workers.”

Schneider and Kindle’s groups are working together alongside Kansas City Kansas Community College (KCKCC) to create a pathway for Wyandotte County residents to fill those jobs. Many of those residents are considered “the working poor” who work multiple jobs for little pay and still live below the poverty line. A job at the Amazon fulfillment center, paid $12.86 an hour, would effectively lift them out of that classification.

“We’re about to launch 16 outreach events specific to Amazon, to basically say, ‘These are the kinds of jobs we have, we want you to be first in line to get those,’” Kindle said.

It’s the first time the community has responded this way to a new fulfillment center in what is already a major US inland logistics hub.

“It’s the size of the job pool. The name recognition does have something to do with it. The 350 companies that we’ve interviewed that have about 1,500 jobs may be anywhere from about two jobs to 200 jobs,” said Kindle.

At the outreach events that begin in June, attendees will get the full rundown: what sort of employees Amazon is looking for, what skills they’ll need, and what steps they’ll need to take to apply and eventually secure a job in the new fulfillment center. That could be as simple as being told where to find the job application for those with the proper training already or how to secure certification for driving a forklift — a one-week course from KCKCC — for those with less training.

What’s particular about the program is that Amazon isn’t sponsoring it. The organizers have developed their program from observing firsthand how Amazon works and who Amazon hires in the Kansas City area.

“Amazon has their own set of requirements,” said Schneider.

“We were able to observe the other Amazon facilities in Johnson County to kind of look at how many jobs were they attracting, what challenges were they encountering,” said Kindle.

Amazon is only involved insofar as they have been told about the program and have had meetings with the program organizers detailing what they can expect.

“And they were frankly surprised,” said Kindle.

The program organizers say they aren’t mincing their words or building anyone’s hopes up. “Not everyone is going to get hired,” said Schneider. There’s absolutely no guarantee that those who participate, attend the outreach events, get the training, apply, or get an interview will be clocking in at the Amazon fulfillment center in June.

“Those people will be enrolled in our KansasWorks system,” said Schneider, referencing her group’s database, which provides users with career planning, job search, occupation guides, and other resources. “If they don’t get a job at Amazon, hey no worries, we can continue to work with them and help find them a job in what is a very high-demand field.”

Transportation and warehousing is the No. 2 employer in Wyandotte County and places No. 6 for the region, she said. In the month of March alone, Schneider said, there were 113 openings for forklift operators.

“It’s a powerhouse for us. It really is. The fact that it didn’t work out at Amazon, there are still so many opportunities. The jobs are there. It’s a matter of getting the training and fitting that person in the right place,” she said.

Those that don’t get hired also create a talent pool that can attract new shippers to the area, said Kindle, in effect fuelling the program’s future.

“You can see where this can become a competitive opportunity for us. If we can, for lack of a better term, package working poor into a workforce,” he said. “Now, when that next manufacturer comes through, that next Amazon, we can say, ‘Look, we were able to get information on 3,000 people in our community, these went to Amazon, I now have a pool of people who are interested in these jobs, ready to go, you just have to locate here.’”

Next post: Amazon to block Australian customers from US Sales