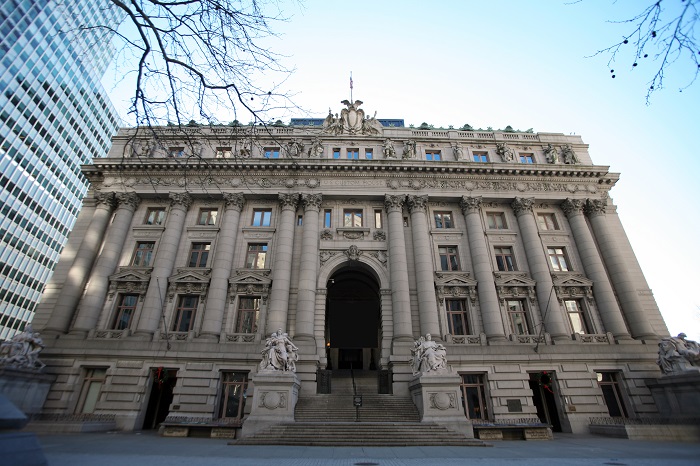 Shippers are struggling with how to leverage e-commerce channels profitably, but the US Customs and Border Protection service is struggling similarly with regulating the sheer number of shipments crossing borders, especially since many of them now qualify under the $800 duty-free de minimis level.
(Above: US Customs House, New York, United States)
Photo credit: Shutterstock.com

From the outside looking in, regulating the flow of e-commerce seems to be the classic “moving goalposts” scenario, stressing US Customs and Border Protection (CBP) resources and forcing the agency to depend on data-based targeting strategies even more than it does on containerized shipments.

For beneficial cargo owners, there may be plentiful opportunities to proactively engage directly with CBP on yet-to-be-finalized e-commerce-focused trusted trader programs that incentivize importers and online marketplaces to provide data to the agency earlier in the shipment cycle.

But the reality is that e-commerce, heavily correlated to small package movement, is not subject to the same regulations as larger containerized or breakbulk shipments. Additionally, small package shipments are growing at a faster clip compared with the low- to mid-single-digit growth of container volume. The number of small packages, express or mail, entering the United States daily has risen from 1.2 million in 2017 to 1.7 million in 2018, CBP Commissioner Kevin McAleenan said in a speech at the Association of American Exporters and Importers (AAEI) annual conference in Baltimore Friday.

“I see it as the biggest change in the global supply chain since the sea container,” he said. “It’s just a fundamental shift in how goods are moving across borders. They can hold the same health, safety, and economic security risk as a containerized shipment or breakbulk, but the volumes are significantly higher and growing every year. We need to respond to the volume shifts from a personnel perspective, from a technology perspective.”

McAleenan admitted there is a “perceived lower interdiction risk” around small parcel cross-border shipments, and that his agency has had to “lean forward on e-commerce” to address it.

He said CBP has been effective in enhancing its targeted approach to small packages, primarily by working with the US Postal Service to get better advanced electronic data on small international shipments.

“The US Postal Service, working with China in particular but also with other governments, is doing much better in getting advanced electronic data and providing it to us so we can use it to identify risk,” he said.

As an example, McAleenean noted that this year CBP has seized 209 shipments at John F. Kennedy International Airport’s mail facility in New York, and “128 of them were attributable to targeting based on the new advanced data that we did not have last year and the year before.”

At the heart of this challenge is not just the basic growth rates of international e-commerce shipments, but also a US regulatory change in early 2016 that raised the so-called de minimis level to $800 from $200. That rule, called Section 321 in customs parlance, means that a shipper can import one shipment per day per person duty-free and with limited data elements as long as the value of the shipment is under $800.

Customs brokers in the United States have long decried the increased de minimis level, which was part of a wider trade facilitation bill (the Trade Facilitation and Trade Enforcement Act of 2015). Brokers say the $800 limit is problematic for three primary reasons: it allows a multitude of e-commerce exporters to ship to the United States without needing to provide key data elements to CBP; it could induce shippers to break up large purchase orders into smaller shipments to evade duties; and the limit isn’t consistent with de minimis levels in other countries.

“It is a tsunami of small packages, especially when you see it up close,” Amy Magnus, director of customs affairs and compliance at the customs broker AN Deringer and a longtime critic of the de minimis level, said during a panel on e-commerce at the AAEI event. “The challenge for customs officers is to do adequate inspection of a truckload filled with tiny packages. If a driver doesn’t have a package valued over $800 in his truck, he doesn’t need to file an advanced manifest if crossing the border by land. It’s happening as I’m speaking to you now.”

Magnus pointed, in particular, to the vast difference between the de minimis levels of the US’s North American Free Trade Agreement partners. Canada’s de minimis level is $20 and Mexico’s is $50.

“And we’re expecting them to go up to $800?” said Magnus, who was recently named president of the National Customs Brokers and Forwarders Association of America. “I see this as extreme arrogance by us to push other countries to get in the same mess we’re in. When we raised our de minimis to $800, we added ‘carbonation’ to e-commerce. We made it easier for countries like China to bring their goods to the US with no duty and limited data. But you try to send that same package to China and see what happens. If we try to export our goods via e-commerce, we’re not afforded that same level of minimum data.”

The issue is also thorny for large shippers that struggle with how to sell their goods via third party e-commerce channels alongside their own website or physical stores.

“The value of goods has no bearing on admissibility,” said Susie Hoeger, director of global trade compliance and policy with Abbott Laboratories, which sells, among other products, test strips for those with diabetes. “The USDA will say we don’t care if it costs a dollar. If it could kill livestock, we’re worried about it. I’d argue you shouldn’t facilitate goods that can hurt people.”

Hoeger was alluding to Abbott products that end up on e-commerce marketplaces, but for which the provenance is unknown. For instance, the company would prefer to sell those test strips to a US consumer from its US-made inventory and via its internally controlled sales channels. That US consumer could go online and buy the strips from a third-party seller, but the product might be fulfilled from abroad, which can create complications. The imported product might be damaged, it might be sold after its expiration date, or it might not fit the US testing device, which is a different size from those Abbott sells in other countries.

If the transaction is less than $800, the seller doesn’t need to provide key data elements to CBP or other related agencies that regulate the product.

“As a consumer, you kind of assume that if I’m able to buy [it], it must be okay to buy it,” Hoeger said.

As e-commerce explodes, customs agencies here and abroad are trying to get a joint handle on what that growth means to the flow of goods across borders. Dave Dolan, CBP’s director of international organizations and agreements, said the World Customs Organization’s (WCO) policy commission released a 50-page document outlining a proposed e-commerce framework of standards, with eight principles and 15 standards. But the WCO recommendations are not binding.

China is currently working through implementation of a draft e-commerce law that would prevent foreign retailers from selling directly to consumers via e-commerce.

“There’s an estimated $1 trillion in e-commerce sales in China,” Evan Chuck, Shanghai office liaison and chief legal representative with Bryan Cave, said at the AAEI conference. “That’s the market the Chinese government is trying to regulate and the same market multinational corporations are trying to access. That’s where the flashpoint occurs.”

Canada is wrestling with some of the same resource questions as the United States.

“There’s a flood of goods via e-commerce and the Canada Border Services Agency doesn’t have the resources to target it all,” said Peter Kirby, a Montreal-based trade attorney with the consultant Fasken. “There are fewer resources focused on more goods coming in.”

Multiple experts described the e-commerce situation as “the horse being out of the barn,” with the key going forward being adaptation to that new reality.

“The big issue is, who is the importer?” said Magnus. “Who is responsible for bringing the goods in? There’s no information on the manifest that tells you who’s bringing those goods in. You don’t have to collect duties to collect more information.”

Next post: Trump tariffs would hit one-third of containerized imports from China