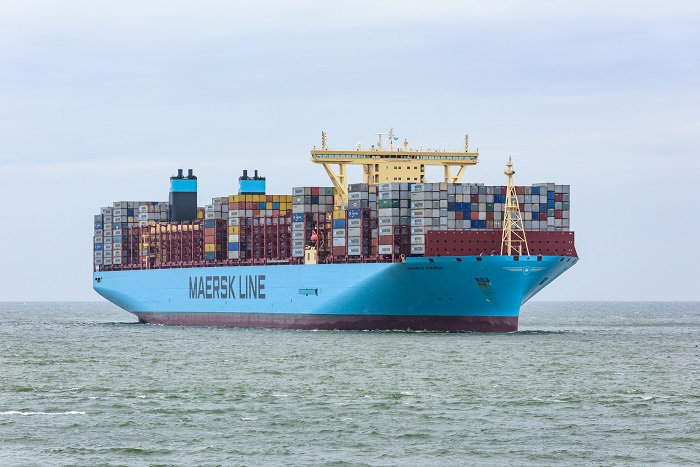 Concerning its first-quarter performance, Maersk CEO Soren Skou said, “We are starting to see the benefits of much better integration and collaboration between the previous independent units.” Photo credit: Shutterstock.com.

It was a different Maersk that faced investors on May 17 to report its first-quarter results. Nowhere was the swagger of prior years within the past decade when major vessel orders were announced, warnings issued to competitors that market share will be defended, or questions raised about the sustainability of weaker competitors’ presence in major trade lanes.

This was a new Maersk, or at least an emerging new Maersk, its business now increasingly tied to activities directly related to container logistics, taking initial steps to distance itself and hopefully one day escape from the commoditization of the ocean segment while aligning its strategy to what could be a very different future logistics environment. The results showed that despite recent announcements committing the company to a radical business transformation — one that has never been attempted let alone achieved by a container line — the company remains in the early stages of that journey. And with its share price down 30 percent since last July, the pressure for progress is building.

Core to its vision is becoming an “integrated” carrier in the ocean space, akin to a DHL, FedEx, or UPS in parcel shipping; integrated meaning a single entity controlling the movement of goods from beginning to end. To accomplish that, Maersk must do two things differently. One is taking control over inland movements, which for a legacy ocean carrier is a huge operational if not cultural change despite having a logistics division. The other is reversing its prior strategy of having its ocean carrier, terminal, and logistics providers functioning largely as separate companies, and driving them to collaborate and perhaps later on to integrate.

Despite reporting what it admitted were unsatisfactory first-quarter results due in large part to cost increases, CEO Soren Skou reported progress on these fronts. “We are starting to see the benefits of much better integration and collaboration between the previous independent units,” Skou said.

The earnings call seemed to have two major themes, one being addressing short-term profitability issues by cutting costs, and the second laying the foundation for bigger changes to come.

For example, with ocean assets struggling to realize a desired return, reflecting the commodity nature of pure ocean shipping, Maersk has ceased investing in those assets, at least for the moment.

“We are becoming a smaller company as a result of this transformation,” Skou said on the earnings call. “During the first quarter, I believe we have bought one tugboat, but that’s it. We have not ordered any ships, and we have not made any commitments to new terminals and the like. We plan to keep capacity constant. We also do not plan to order any new ships at least for the next 12 months,” he said in what could be read as a broader message to Maersk’s peers. Subsequently, it delayed delivery of its 11th and final Triple E ship.

The near-term focus, the company said, is on reversing a 12 percent first-quarter increase in unit costs related to higher fuel costs, foreign exchange, and feedering costs, the latter of which triggered a plan to withdraw from providing certain feeder services. The pullback from feedering is reminiscent of its withdrawal in 2007 from multiple US inland destinations served by rail.

“We will optimize the landscape of feedering; that means we will reduce the number of feeders that we have out there and generally channel more volume to direct ports,” Chief Operating Officer Soren Toft said.

But while in part reflecting short-term priorities, such moves are taking place within the context of its declared and increasingly urgent reinvention. It is not at all clear that consolidation of container carriers over the past two years will by itself yield an improved pricing environment. Rate volatility remains, and mega-ship ordering by carriers including Mediterranean Shipping Co., CMA CGM, and Hyundai Merchant Marine has resumed. What will be more critical for any logistics provider, whatever form its business takes, is the ability to create value across customers’ supply chains to remain relevant in an era when e-commerce platforms such as Amazon, Alibaba, and JD.com are moving more aggressively into logistics.

“The next [wave of] competition is not going to be about companies, but about supply chains. Maersk is actually competing against Amazon rather than against other shipping companies,” Alexander Varvarenko, CEO of the online marketplace ShipNEXT, told the XChain2 blockchain conference in Houston on May 21.

Given the pressure Maersk is under to show improvement in results even as it manages its way through a complex transition, a more positive business climate for its core container shipping business would be helpful, and some believe it’s coming. “The container shipping sector is set to benefit from a rapidly improving market balance,” Jefferies’ analyst David Kerstens wrote on May 17.

Skou added, “If you look at the long-term picture on supply and demand, then the industry has come from a situation 10 years ago in 2008 where the orderbook of existing capacity was equal to 60 percent. And now it’s 12 percent … so that seems like a very manageable number.”