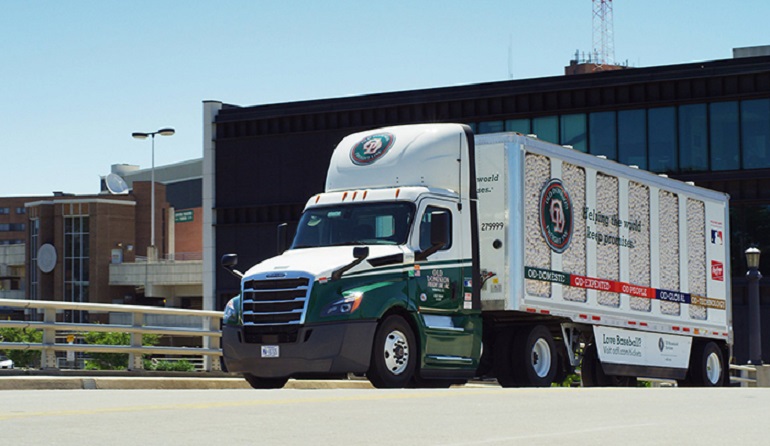 The bread-and-butter customer for the less-than-truckload industry has long been the manufacturer or industrial shipper, but retail shipments are rising at Old Dominion Freight Line (ODFL) faster than the company average. Photo credit: ODFL.

A drop in truck freight tonnage or shipment weight isn’t necessarily a sign the US economy, or a trucking company, is slowing. Old Dominion Freight Line (ODFL) reported a slight drop in less-than-truckload (LTL) weight per shipment from the second quarter to the first quarter — slightly less than 1 percent. The LTL carrier didn’t move less freight, however, just lighter freight.

“We note that 16 of our top 50 customer accounts had a decrease in weight per shipment during the quarter but those same accounts had an average increase in revenue of 46 percent,” chief financial officer Adam N. Satterfield, said Friday. The trend “was based more on changes with the mix of our freight and should not be interpreted as a negative read on the economy,” he said.

The changing retail dynamics of the ‘Amazon Era’

The trend may point to greater “mode-shifting” by shippers, not just because of tight truckload capacity, but also changing retail dynamics in the “Amazon Era.” As demand for faster fulfillment and replenishment cycles increases, LTL carriers may be taking on more “middle mile” freight movements ending at customer-facing distribution points once handled in truckloads.

Getting the best possible freight density per trailer, the goal of ODFL and every other LTL company, also comes into play. The goal is to fill that cube before hitting the maximum weight.

In July, LTL weight per day increased 11 to 11.5 percent year over year and shipments per day rose 11 percent, Satterfield said during an earnings call. “Convergence in tonnage and shipment reflects the impact of changes in LTL weight per shipment … as well as other initiatives that we have taken to prevent heavy-weighted items from taking up too much of our capacity.”

Satterfield referred to pricing initiatives aimed at discouraging shippers from tendering heavier shipments that cause a trailer to “weigh out” before it “cubes out.” In other words, shipping more, lighter goods, and less unpaid-for air. “We want to make sure that we’re continuing to handle LTL freight and not truckload freight, and so that has been intentional,” he said.

That in itself is a sign of tight capacity and high rates in the truckload market, which has pushed more truckload shippers to look for space on LTL trailers. Several LTL carriers have noted the “mode-shift.” “Our average weight per shipment is up 7.5 percent on a year-over-year basis,” Tom Connery, president and chief operating officer of New England Motor Freight, said in May.

He blamed high freight demand and the electronic logging device (ELD) mandate. “We’re seeing 35-skid pick-up orders spread across three bills of lading that would have been a truckload order,” Connery said at the NASSTRAC 2018 Shipper Conference in Orlando.  We’re having to tell customers, ‘Time out! We can’t take truckload after truckload day in and day out.’”

Some of the deconsolidated freight that’s been shunted to LTL trailers probably will revert back to truckloads when over-the-road capacity eventually loosens up, but some may not. “There will be long-term secular shift of freight from different modes of transportation coming into the LTL industry,” Satterfield said. “We believe we’re seeing some of that happening now.”

The bread-and-butter customer for the LTL industry has long been the manufacturer or industrial shipper, but retail shipments are rising at ODFL faster than the company average, rising about 28 percent in the second quarter, he said. About 60 percent of ODFL’s revenue is industrial-related, and the US industrial economy has been “firing on all cylinders,” he said.

But as truckload shippers deal with tight capacity, higher rates, and — thanks to the ELD mandate — longer transit times and uncertain deliveries, LTL carriers are claiming an advantage.

“As supply chains become more sophisticated, as large retailers implement programs that charge back and fine shippers for not getting the freight delivered on time and without damage, it really creates tremendous opportunity for us and that’s the opportunity that we’re seeing now,” said Satterfield. ODFL handles that time-definite freight as expedited shipments.

The extent of any mode-shifting by shippers will come into better focus as more of the publicly owned LTL and truckload carriers and intermodal companies release second-quarter earnings in the days and weeks to come. Results to date show all types of carriers exercising greater control over freight they choose to haul in a hot market in order to maximize profitability.

David S. Congdon, ODFL executive chairman, doesn’t see the market cooling. “There’s a notion out there in the most recent days that we’ve reached some kind of a peak … I don’t know but I don’t believe it,” he told Wall Street analysts. “We’re just not seeing any notion of peak in the economy right now and certainly no notion of peak when it comes to Old Dominion.”

Old Dominion Freight Line is in an LTL ‘horse race’